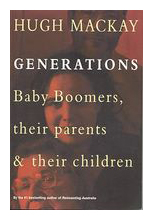 Hugh Mackay’s central audience in “Generations” is the Baby Boom generation. These are the generation most aware of their identity as a cohort, the most likely to buy and read his book.

Mackay in 1997 describes the life of the cohort born in the late 1940s and early 1950s as
a dream start, full of the promise of an endless prosperity, followed by turbulence and hardship in their middle years.

The baby boom is connected with the marriage boom and the economic boom in Australia: responses to postwar optimism. Construction and manufacturing were growing as the older ‘Lucky Generation’ expected permament economic growth.

At the same time, Baby Boomers were growing up in a world polarised by a cold war between two competing ideologies: communism and capitalism.

Mackay points to a fascinating tension between optimism and idealism on the one side and the belief that the world could end in catastrophic nuclear war.

This is the generation who were brought up with a quest for personal happiness, expectation of material comfort and the ideal of egalitarianism. In mid life Baby Boomers have discovered that these expectations come with prices: high divorce rates, two-income households, and STRESS.

Mackay puzzles over the nostalgia of Boomers who ‘refuse to grow up’.

“They have become the generation who are still determined to stuff themselves into blue jeans in their late forties (partly to pretend they are not as old as they are, partly to remind themselves of how they looked in their teens, and partly to symbolise their determination to ‘stay close’ to their own children). They are still playing the music of their youth and young adulthood…”

This approach strikes me as an example of generational misunderstanding. This generation who will never grow into copies of their parents. It is a generation defined by the development of an alternative culture which was mistakenly assumed to be youth culture only. I see this in churches that expect people in their thirties and forties to suddenly tune in to traditional forms of worship. Or churches that say that their focus on work with the ‘Lucky Generation’ will pay dividends as the baby boomers start retiring. The bad news is that the retiring baby boomers are not likely to switch cultures.

The irony is that the Lucky Generation have the same approach but are not so aware of it. Ask them what they were listening to between the ages of seventeen and twenty five and they’ll break into community singing. The tastes they developed back then haven’t gone away. Likewise their approaches to short hair and formal clothing.

What a heading! It certainly captures the sense of the fast pace of the Boomer generation. Stress for many is ‘inextricably linked in their minds with the idea of busyness’. It’s not just managing their own hectic lives, but also organising the lives of their children.

Mackay tells us that “Boomers envy their parents for having lived at a time when things seemed more ‘cut and dried’ and when even personal morality seemed more straightforward than it does in the kaleidoscope of relativity and postmodernism.”

I imagine that this envy might surface at times of mid life crisis of early Boomers. Perhaps this is an example of the nostalgia Mackay refers to earlier. But it is superseded by the change of values relating to marriage and family.

It’s the Baby Boomers who started talking about the quality of relationships: the quality of intimacy, quality time. And perhaps because of those very expectations, Boomers surpassed their parents in the rate of marriage breakdown. It could be argued that marriages had broken down just as much before, but had not been allowed to be dissolved. But now, with the relaxing of expectations regarding gender roles, and the increased financial independence of women, divorces could be considered openly. Mackay remarks that the majority of divorces are now being intiated by women.

Boomers left school with a choice of well paid careers before them. Now, in mid life and beyond, many have experienced redundancy or retrenchment. Men and women have learned to adjust to two-income families. Men, in particular, have had to rethink their sense of identity with something other than work.

It all seems so serious

Boomers in Mackay’s focus groups are discovering that ‘life is harder than they expected it to be…. that their beloved freedom has given way to a feeling of being enclosed by responsibilities, pressures and anxieties.’

I’m wondering how much of the distinct values of this generation are coming through here. By taking a group of people facing mid life crisis it would be expected that issues are related to life stage more than to generational values.

Mackay considers the contrast between the exuberance of the anti-Vietnam protests and the heavy-going middle years. He comments that these Boomers are taking the task of parenting more seriously than their parents did.

I agree with Mackay where he says that the Boomers are consistent really. Their whole lives, from young adulthood to middle years are marked by intensity. He writes, “The Lucky Generation are bemused by their Boomer offspring’s solemn commitment to navel-gazing, to self analysis and to the relentless pursuit of personal gratification.”

Yes. This generation are into self analysis. Which is why they are the one generation most open to considering and acting on generational theory.

Men have had to grapple with the effects of the feminist movement. Men who grew up with Dad as the ‘head of the house’ and breadwinner have faced a revolution, a loss of control. At the same time, the emerging ‘rules of engagement’ have not been clear for men. Should they explore their ‘feminine side’? Or rediscover the masculine in new ways? It’s not clear. But in the process of gender redefinition, men have learned how to be more actively involved with their children.

Women have had the opportunity to set their own agenda, taking on choices that are more stimulating and interesting than those perceived to be experienced by the Lucky Generation women. A fascinating insight: the realisation in hindsight that equal rights does not mean that all of those rights have to be exercised at once. The tensions between career aspirations and maternal aspirations are explored in depth by Mackay.

Saying ‘No’ to Religion

“The Boomers might turn out to have been the last generation of Australians to attend Christian Sunday Schools in large numbers.” I’ve met a few from the Lucky Generation who struggle to accept this. However it is clear that the Baby Boomers as adults have stayed away from conventional religion and are not likely to return to it in droves. They’re hooked by materialism.

Mackay describes the belief that solid values came from stable family life, supported by a steady income from a reliable supply of work. Add to this belief the perspectives of Freud and Einstein and we end up with the belief that all answers to our questions are within us, and that everything is relative.

Sex
Mackay sums up his section on Baby Boomer sexual attitudes with the stunning sentence:
“Impatient to pair off at an early age, they have been obsessed with pairing off (either in fact or in fantasy) ever since.

Travel
Boomers travel the world discovering themselves in cross-cultural experience.

Food
This generation are proud of their exposure to a huge range of ethnic foods. Coffee is named as ‘heavily symbolic’. And not just any coffee. Expresso coffee in its many forms.

Information
“They consume information as voraciously as they have previously consumed Thai food, experiential holidays, sexual partners or cars”.

Personal Growth
This movement in the 1970s provided a psychological culture of ‘do your own thing’, leaving a legacy of self-centredness. Newly ‘aware’ Boomers leave their spouses to ‘discover themselves’. Mackay admits that many found help in personal-growth courses but remains scathing.

Emotional Hazards of Over-Parenting
Mackay concludes his section on the Stress Generation by exploring their parenting of the next generation.

It’s hard to say if Mackay’s Boomer focus groups were more self-critical than the others, or if Mackay is allowing his generational bias to seep through. The other possibility is that Boomers present different issues when talking to an older researcher. It would be fascinating to conduct some testing on the impact of a researcher’s age on any focus group.

Either way, it is clear that Mackay’s chapter on the Boomers is not kind. He has these people pining for the lost values of their parents but revelling in their materialist lifestyle.

One Reply to “Hugh Mackay on Stressed Baby Boomers”