Dulux indoor house paint is being advertised in a television commercial featuring a ghost. The camera opens on a house in the woods. We hear the distant sound of a woman singing. We’re now on the first floor. The dog looks up, woken by the sound. The couple in the bed behind are roused by the song. The man cautiously goes downstairs to investigate. As he walks down the corridor on the ground floor we see a shot of a ghost flying past in the room behind him. He looks into the study with a piano. No, she’s not there. And then shock!!! 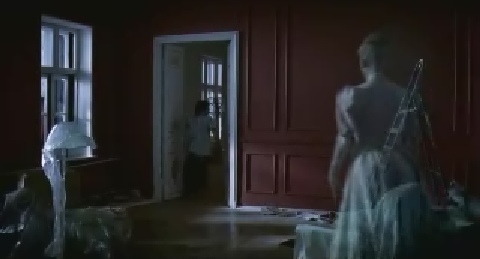 She’s there in front of him, dressed in Victorian clothing. Stirring strings alert us to the danger element. He runs. She pursues. The camera moves to the man’s partner coming down the stairs. He’s running through rooms. The ghost is flying through walls. Dodging ladders and boxes, the man runs through an open doorway. The ghost speeds towards a freshly painted wall, meaning to pass through it and continue chasing him but she bounces straight off and ends up on the floor, unconscious. The final text: “Nothing repels like Dulux Wash & Wear Advanced. Worth Doing, Worth Dulux.” Click on the image below to play the video.

Filming was shot in a former summer palace outside Kiev in the Ukraine, by director Garth Davis via Exit Films, with director of photography Greig Fraser.

Media production is provided by OMD.

Music/Sound was provided by Elliot Wheeler at Nylon Studios, and Human Worldwide Music and Sound Design.