My 17 year-old son is on his first day of school holidays today. And to mark the occasion, he’s invited 30 people round for an XBox LAN party. This is the third one we’ve had here. They keep getting bigger. We’ve got two data projectors set up in different rooms. Two TVs in the lounge/living room. Each can have four people playing. There’s potential for another three televisions if people turn up with them. They’re all linked up via a router and a switch. 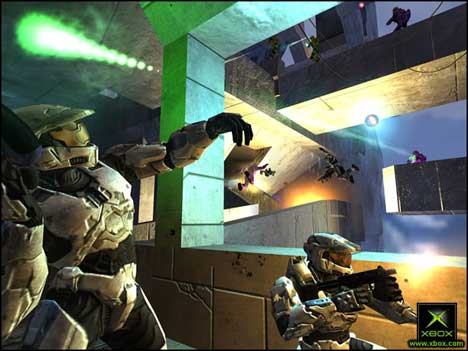 Microsoft’s Halo 2 is all about carnage. Aliens (an alliance known as the Covenant) have invaded Earth and threaten to wipe out the human race. These are the aliens that were encountered in outer space in Halo: Combat Evolved. The team’s challenge is to defend the Earth and then pursue the aliens through space to ensure that they don’t return. That’s the campaign version of the game. What’s happening today is the more competitive version in which individuals or teams take each other in a variety of environments with a variety of arsenals. Rocket launchers, sniper rifles, shotguns and machine guns (and more) are supplemented by the weapons of the Covenant, beam rifle, energy sword, plasma rifle and needler (and more).

So what about the ethics of playing shoot and kills games?

I remember a movement in the 1980s to keep toy guns out of the hands of kids. Parents (mostly mothers) supported one another to keep ‘cowboys and indians’ and ‘cops and robbers’ out of the backyard. That movement’s still strong in parts of the United States and is moving toward making the sale of toy guns illegal.

What we’ve got here on screen is basically cowboys and indians with a much higher level of sophistication. At least it’s not as graphic as some other games that feature blood and decapitation.

I’ve played a few games with the guys. It’s exciting. It demands high levels of awareness and skill. But occasionally I’m off playing. Like after watching a documentary on the Columbine School shootings.

Believe it or not, some people have worked on a Christian platform for playing Halo 2. Like Dare 2 Share’s E Team Revolution. Lane Palmer, Director of Equipping, has written a brief for Christians looking to make a connection between their on-screen fighting and sharing their faith. He suggests three angles. One – make the connection between the plot (saving the Earth) and the Christian story. Two – talk about what happens when you die. Three – share the gospel with other players online.

OK I can see some possibilities there. But at the same time there’s a challenge that goes right to the heart of the conflict between ‘just war’ and ‘pacifist at all costs’ approaches. As one online writer cynically comments, “Hallelujah, Ian, many people don’t know that Jesus actually entered Jerusalem carrying a needler rifle.”

I wrote an article a couple of years ago on a laser skirmish game run at a Christian youth event. I was one of the professional soldiers – there to be taken out by teams of young people. The article’s online at here. I said there that we can easily buy into the ‘us and them’ approach, focusing all our fear and mistrust onto one group of people.

There’s a useful web site helping parents work out what their kids are engaging with in video games. Mediawise has a public service announcement (psa) tv advert with a boy describing his participation in dismemberment, decapitation and killing of innocent people. It’s a vivid reminder of the effect of such video games on the minds of young and impressionable kids. The video’s a flash animation (198 kb) but it’s also available in quicktime format (3 MB)at Hungry Man, under the portfolio of the director, Scott Vincent.