The Antz Pantz ‘Sic Em Rex’ series is considered one of the most memorable television advertising campaigns in Australia. The three TV ads, from 1989/1990, 2003 and 2005, have somehow caught the imagination of many young Australian women with their cheeky sensuality. Pacific Brands continue to keep the connection between Antz Pantz underwear and Rex, the echidna with a tongue for ants. 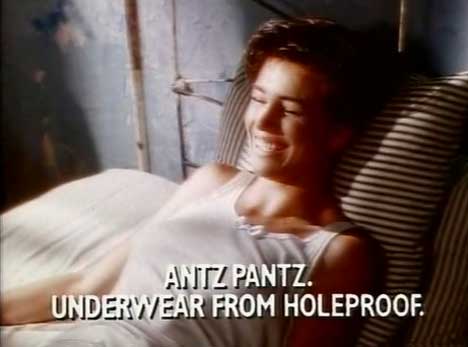 The original Antz Pantz commercial, launched in 1989 and 1990, features a female backpacker, her pet echidna, and a few local ants. In an hot humid backpacker’s room a woman is lying on her bed, watching the ants crawl over the desk and phone and clock. The music rises in tension as the ants crawl up her leg. An echidna (an Australian ant-eating mammal like a hedgehog or porcupine) waits by her side. Finally the ants reach the woman’s white Antz Pantz knickers. The music stops. She says, “Sic ’em Rex”. With a call of delight Rex leaps up to lick up the ants. The woman lies back to enjoy the experience. The voiceover, “Underwear that’s nice to crawl into”. The super: “Antz Pantz: Underwear from Holeproof”.

The first Antz Pantz campaign was created at The Campaign Palace, Sydney, under the creative direction of Mara Marich and Sarah Barclay.

The ad featured model Toneya Bird who went on to appear in international campaigns for Loreal and Cover Girl.

Apparently the Antz Pantz television commercials caused some heated debate in Australia. Was it due to the sensual nature of the ad? Or was it just that Australians weren’t ready to be licked by echidnas?

In 2003 Pacific Brands launched a fresh television campaign, using the same ant-eating concept. This time, Rex had three women to look after. The original ad was shown on Australian channels towards the end of 2002, to be followed up by the new ad. 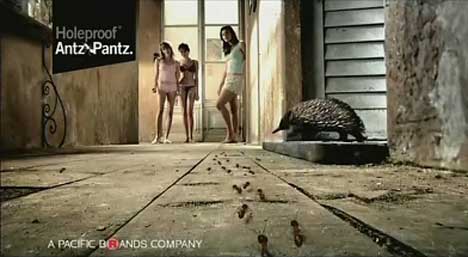 The spot opens with a backpacker’s room with a radio playing Spanish music and commentary. Ants crawl over a pair of thongs (sandals), a passport and local currency. On the bed a woman wearing black Antz Pantz underwear (Michelle Leslie, AKA Michelle Lee), has ants crawling over her leg. Once she has ten ants walking towards her pants she calls Rex in to do his thing. The woman and echidna are both clearly delighted. In another room a woman in white underwear waits. “Now sic me Rex”. A woman in blue underwear calls Rex into her room. The ad finishes with Rex walking through a door to discover three more women waiting for him at the end of the corridor. He collapses with exhaustion.

Once again the Antz Pantz commercial was directed by Iain McKenzie, this time through POD Film, with producer Catherine Kerr.

Post production and animation was done at Digital Pictures, Sydney, produced by Lois McKenzie, with 3D by Andrew Jackson, Jason Li, Tom King, 2D by Tim Davies, and telecine by Peter Ritchie. A mixture of live action and 3D ants was used. Digital Pictures modelled and rendered a 3D echidna for the shot but decided not to use it when they saw how well Rex actually performed in front of the camera. 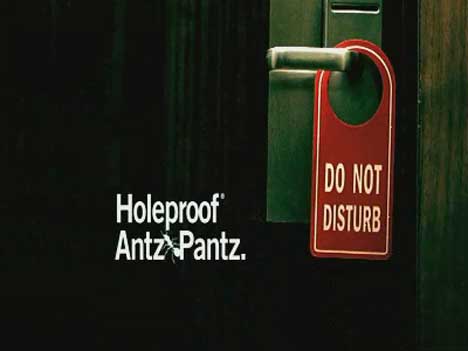 Antz Pantz at the Stewart Hilton

The 2005 Antz Pantz television campaign featured Nicky Hilton and Kimberly Stewart (daughter of Rod Stewart). Hilton and Stewart are in their hotel room when they discover an ant invasion. Ants crawl over the piano, over benches, photographs, a telephone, and unwashed plates. Stewart calls out for room service. The door opens. A handsome steward enters with a platter containing an echidna ready for action. “Sic em Rex” is followed by raucous laughter. The steward leaves the room, with a sign saying “Do not Disturb”.

Director this time was Jon Gwyther at Plaza Films.

“Consumers love him. He’s this sexy, cheeky, slightly irreverent character that’s iconic. If you’ve got something iconic for your brand, you should leverage it,” Pont said.

Antz Pantz has replaced Nicky Hilton with Megan Maitfield, who won an ‘it’ girl competition to appear alongside Nicky Stewart in 2006 promotions.

3 Replies to “Antz Pantz Licked By Rex the Echidna”