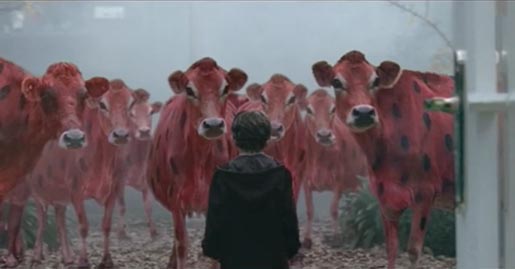 Pursuit, the first of the Cravendale cow Tv commercials was released in January 2003 and is based in Prague. Deep in an underground carpark a man’s trying to start his car. He’s being watched… by a Friesan cow. He gives up and walks, taking his supermarket shopping with him. A bovine foot smashes the evidence of sabotage – electric leads on the ground. The haunting music builds the tension as the man walks out of the building and over a bridge, now followed by a herd of cows. Finally the man reaches the safety of his apartment building. As he pours himself a drink of milk the voiceover begins, “Cravendale is no ordinary milk. It’s filtered to make it pure.” We see a shot of cows inside an elevator, and another shot of cows hoisting themselves up on a window washer’s outside platform. The camera cuts to the window to reveal the spying eyes of a cow. “Cravendale tastes so good cows want it back.” There’s a knock at the door and a ‘moo’. We’re given a link to the web site, www.protectingthetaste.com. Click on the image below to play the video in Vimeo (HD)

“Supermarket Heist”, the second in the series, released in February 2004, promotes Purfilter Milk. The ad won a BTAA Award in 2005. It’s 5 o’clock on a cold misty morning. A supermarket carpark stands empty except for Friesan cows. They advance to the doors, avoiding a solo jogger. The camera zooms into the Cravendale milk display inside as the voiceover starts. “There’s no fresh milk like Cravendale.” A cow pushes supermarket trollies in the carpark. “It’s filtered to make it purer.” Outside a cow kicks a switch to disable the security system. The trolleys come smashing through the window followed by rampaging cows heading to the milk display. “Cravendale tastes so good the cows want it back.” Click on the image below to play the video.

Pursuit was directed by Jason Smith via The Artists Company with producer Kate Collier. See Nigel Talamo’s Speed of Art site for photographs behind the scenes. Supermarket Heist was directed by Jason Smith via Brave Films with producer Emily Bliss. Director of photography was Simon Archer. Post production was done at VTR/Framestore CFC. Andy Sparrow has posted his pencil drawings of the storyboard. Sound production was done at Jungle Studios, London.

“The Hinted”, the most recent commercial, also known as ‘A Hint Of’, was released on October 17, 2005. A woman and boy walk from a supermarket to their car. In the background we hear wind and crows – reminiscent of Alfred Hitchcock’s ‘The Birds’ or ‘Buffy the Vampire Slayer’. As the boy connects his seatbelt in the backseat he catches a glimpse of a strawberry coloured cow in the side rear vision mirror. As they drive home he sees cows. A cow stands sentry on the roof of a block of flats. Another waits at the gate of a used car sales yard. A lone cow looks down from an overpass. Two cows wait by an overturned refrigerator. We see the boy from the cow’s point of view – from behind a picket fence. The car stops at a red light. Looking out to see a cow peering through his window he waves. Unaware of the apparitions, the mum waves back to her son. The light turns green and we see that there are four cows waiting behind. The camera cuts to the mum carrying the shopping into the kitchen. As the boy heads out into the mist the voiceover starts. “There’s a new kind of Cravendale… called ‘Hint Of’. Fresh milk with a hint of something so good…” – as the mother pours a glass of milk with a hint of wild strawberry the boy’s out meeting the cows – that strawberry cows want it back.” The mother turns her head at the sound of a ‘moo’. Click on the image below to play the video.

2 Replies to “Cravendale Cows want the milk back”