Bryan Turner and June Edmunds provide a thorough examination of the role of generations in the shaping of contemporary culture, intellectual traditions, social movements and national consciousness. In their 2002 book, Generations, Culture And Society, they consider the particular impact of the post-war early Baby Boomer generation on the UK, North America and Europe. Their sociological insight is made credible by their consideration of national perspective alongside the particularities of gender. 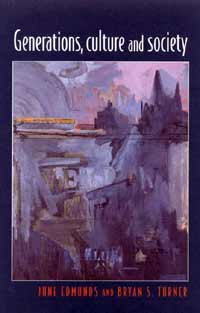 In their concluding chapter Turner and Edmunds explore the global responses to the collapse of the World Trade Center. Benjamin Barber in 1995 wrote that the world is organised around the dialectic of Jihad vs McWorld, between anti-global loyalties and the neutral cosmopolitanism of world trade. Turner and Edmunds take a more optimistic view, suggesting that the emerging generation is likely to be motivated to avoid the repetitions of such horrors.

Turner and Edmunds summarise the benefits of generational analysis:

1. Mounting evidence that the post-war generation, by virtue of its size and strategic position, has been particularly critical to social change in the twentieth century.
2. Post-war generation was important to the rise of modern consumerism which tends to be structured around generational markets – motivated by the creation of a youth movement that shapes contemporary fashion.
3. Demographic changes associated with the growth of an ageing population have created a range of pressing policy issues and increased potential for intergenerational conflict.

In their book Turner and Edmunds build on the sociological tools developed by Karl Mannheim by complementing them with the cultural sociology of Pierre Bourdieu.

Pierre Bourdieu argued that inter-generational conflict brings about social transformation. The social success of emerging generations takes place through competition with existing generations in power. Bourdieu’s work is outlined in An Invitation to Reflexive Sociology.

They argue that the globalization of culture, expressed in the passive media of television and developed in interactive web-based media, is the product of the 1960s generation.

Turner and Edmunds grapple with the ideas of Allan Bloom, who says in his 1988 book Closing of the American Mind, that unfettered democratization and extreme relativism in education have led to the ‘dumbing down’ of American society. The authors, while accepting some of Bloom’s points, argue that a new internationalism was created by the interconnectiions between different cultures expressed in the Baby Boom era. While traditional approaches to higher education have been spurned by many, the authors are able to tell the story of emerging generations of intellectual politicized women who had entered higher education en masse.

Turner and Edmunds say that their main concern in this book was to show that society is being shaped by generational location and shared generational experience rather than economic class. Institutions such as universities have been surpassed by broader intellectual movements expressed in wider global forums. Intellectuals, through the internet, have been both carriers of national distinctives as well as creators of a global community.

One of the most helpful chapters in this book focuses on the role of emerging generations of ethnic minorities in shaping national consciousness. Edmunds and Turner map out the role of ‘founding fathers’ in developing a nation’s self-identity, often around a simple homogeneity. New generations of minorities, politicised by involvement in a broader generational movement, take on the challenge of re-shaping the nation’s identity. Clear examples are found in the emergence of African American, Indian American, Asian American and Hispanic generations in the USA who have been effectively challenging the concept of ‘melting pot’.

The authors reflect on the UK context in which emerging generations of intellectuals are able to advocate for cosmopolitan transcendence of national boundaries while tolerating benight local and national identities such as the Scottish and Welsh. Being British is no longer simply about being English.

The emerging generations of global intellectuals is able to go beyond the polarisation of “Cold War intellectuals, pro-American apologists or nostalgic migrants.” The authors acknowledge that the post-September-11 environment will test this trend.

Turner and Edmunds explore the emerging voice of women created out of traumatic events such as the First and Second World Wars, Algeria and Vietnam. They argue that in the UK an emerging group of intellectual women are providing alternatives to the war-focused identity developed by the ‘founding fathers’.

The authors conclude with the prospect of generational change developing national consciousness in places of trauma like Palestine and New York. “Watch this space”.

Bryan S. Turner was Professor of Sociology at the University of Cambridge from 1998 to 2005
and is currently professor of sociology in the Asia Research Institute, National University of Singapore. He was previously Dean of the Faculty of Arts at Deakin University in Australia. He is the founding editor of three journals – Body&Society, Citizenship Studies and co-editor (with Mike Featherstone) of Body & Society and Journal of Classical Sociology. He is the author of Orientalism, Postmodernism and Globalism, (1994), The New Medical Sociology: Social Forms of Health and Illness, (2004), edited Max Weber: Critical Responses

(1999), in three volumes and wrote the introduction for the 1992 edition of Karl Mannheim’s Essays on the Sociology of Culture. There are many more books written by Bryan Turner.

Over the next six years in Singapore, Bryan will direct research on globalisation and religion concentrating on such issues as religious conflict and the modern state, religious authority and electronic information, religious, consumerism and youth cultures, human rights and religion, the human body, medical change and religious cosmologies. These research foci will be explored through various religious systems. The general aim is to develop a comprehensive overview of the impact of globalisation on religions, and the consequences of religion on global processes. He intends to complete three volumes for Cambridge University Press on religion and globalization.

June Edmunds is on the staff at University of Cambridge in the area of development studies. Her research background is in nationalism, ethnic relations, politics, culture, and the sociology of generations. She has published widely in these areas with articles in journals such as Twentieth Century British History, Politics, Ethnicities, the Journal of Consumer Culture, and Social Science and Medicine, as well as book chapters on national identity and generational closure. She is the author of The Left and Israel: Party-Policy Change and Internal Democracy (2000), and edited (with Bryan Turner) Generational Consciousness, Narrative and Politics (2002). Dr Edmunds is currently working on the impact of cultural trauma on political identity and activism in migrant communities. Forthcoming articles explore global generations and social change, and transnational social movements. She is also developing a research project on transnationalism among young Muslims in the UK.