The Qantas campaign, “I Still Call Australia Home”, is one of the frontrunners for the top Australian television campaigns of all time. Running from 1997 through to 2004, the campaign has linked together Australians living at home with those travelling or living overseas. Beginning with a range of Australian musicians, the campaign has come to be associated with the Australian Girls Choir and National Boys Choir. 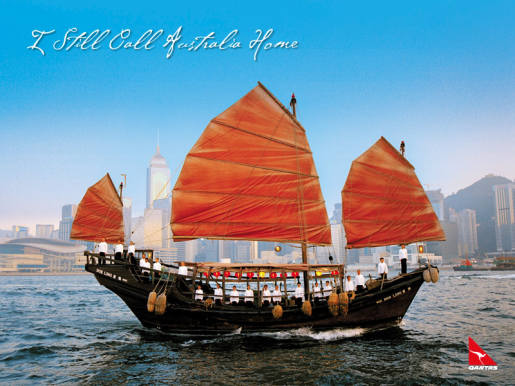 The campaign began in 1997 with a three-minute commercial featuring trumpeter James Morrison, Kate Ceberano, James Blundell and other popular singers singing Peter Allen’s song, “I still call Australia home”. In the background are scenes from around the world and Australia. The shot finishes with a Boeing 747 and the words, “QANTAS The Australian Airline”. Click on the image below to play the video.

The 1997 campaign was developed at Publicis Mojo, Sydney. Director was Geoff Dixon, via Silverscreen Films with director of photography David Gribble.

On Christmas Eve 1997 another Geoff Dixon, then marketing manager with Qantas, was watching the Christmas Eve concert of the National Boys Choir in Canberra. On the next morning he phoned John Singleton to suggest a campaign built around the choir singing Peter Allen’s song in six international destinations. They contacted the National Boys Choir and Australian Girls Choir with their proposal to fly the young performers to the Brooklyn Bridge in New York, the Great Wall of China, canals of Venice, the praires of Argentina, temples in Thailand, Kings Canyon in Northern Territory, Australia, with costs reaching three million dollars. Click on the image below to play the video. 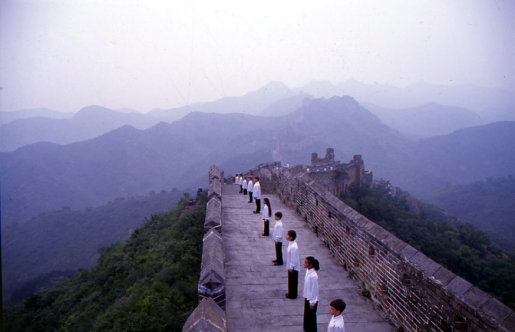 “I Still Call Australia Home” spot was produced in 3-minute and 60-second spots, and broadcast during the Australian broadcast of the opening of the 1998 Commonwealth Games in Kuala Lumpur, Malaysia. The choir were involved in promotional appearances, including a promotional concert in Los Angeles that tied in with the highly successful airing of the TV spot in the Super Bowl, January 1999. The Super Bowl screening ensured that Qantas reached over 14 million viewers in the United States. The spot reached an estimated 31.7 million viewers after it was picked up by “high-credibility” media outlets, including CNN International and ABC World News.

A Channel Ten documentary, “They Still Call Australia Home”, provided a behind-the-scenes look at the making of the ad, following the members of the two choirs. Jason Cameron filmed the choir in performances and recreation in Australia and USA. The choirs sang in Christmas concerts in Melbourne and Parliament House, Canberra. In Los Angeles the choir sang “America the Beautiful” at a UCLA basketball game, and sang “I still call Australia Home” on a morning television show. The ‘Qantas Choir’ went on to perform in media launches in Manila, Jakarta, Hong Kong and Tokyo. They together recorded The Sprit of Christmas CD, which went platinum and was nominated for an ARIA award.

In 2000 Qantas came up with a sequel to the choirs’ performance, another television advertisement with the same format. This time the choirs spent six months visiting New Zealand, a Massai village in Tanzania, the Taj Mahal in India, the Statue of Liberty in New York, Xi’an (Terracotta Warriors) in China, London and Stonehenge in the UK, and in Australia an Aboriginal traditional site, a sheep station, and Uluru (Ayers Rock) in Northern Territory, Australia. The two-minute spot and three sixty second spots were shown in American and Australian broadcasts of the the Sydney Olympics, 2000. The making of the 2000 campaign became the subject of a documentary program Wandering Spirits, which aired on Channel 7. Click on the image below to play the video.

The 2000 Qantas ‘Still Call Australia Home’ campaign was created by Singleton Ogilvy and Mather, Sydney, and directed by Iain Mackenzie with his own company, Blindfold Pictures, Sydney. 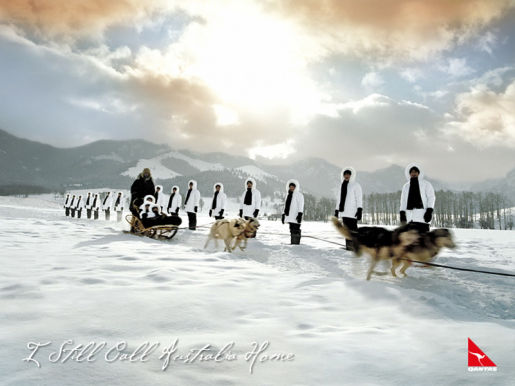 In 2004 Qantas and Singleton Ogilvy & Mather provided the third choral version of “I Still Call Australia Home”. This time filming took place in every state and territory of Australia, along with new international locations. Filming started in October 2003 and finished in early March 2004. Shots include Cradle Mountain in Tasmania, the Arc de Triomphe and Eiffel Tower (carousel) in Paris, a junk in Hong Kong harbour, riding with huskies in Canada, Queenstown in New Zealand, Lincoln Memorial in Washington DC, Temple of Poseidon in Greece, Sydney Harbour Bridge, Ninnaji Temple in Kyoto, Japan and Jabiru in Northern Territory. The ad finishes with 500 children (half from local schools) in the shape of a kangaroo on Whitehaven Beach in Queensland, Australia. Click on the image below to play the 2004 Directors Cut video.

Filming was shot by director Wayne Maule via Plush Films with director of photography Geoffrey Wharton and production staff from around the world. Post production was done at Fin Design.

Peter Allen, composer of the song, “I Still Call Australia Home”, was a songwriter and cabaret-style performer who spent most of his performing life in the United States. He was most popular in the 1970s and 1980s, co-writing songs for Melissa Manchester, Olivia Newton-John (I think I love you). He helped write the theme to the 1981 movie Arthur, which featured his ex-wife Liza Minnelli. Allen’s albums included Tenterfield Saddler (1972), Bi-Coastal (1980) and Not the Boy Next Door (1982). He died in 1992, aged 48, after giving his final concerts in Sydney, Australia. “I still call Australia home” was used in ‘The Boy from Oz’, a musical about Allen’s life, starring Hugh Jackman.

‘I Still Call Australia Home’ is featured on the album, ‘The Very Best of Peter Allen, The Boy From Down Under‘.

Note that the original lyric has ‘Rio’ rather than Rome. However Qantas doesn’t fly to Rio.

I’ve been to cities that never close down
from New York to Rome and old London town,
but no matter how far or how wide I roam
I still call Australia home.

I’m always traveling, I love being free,
and so I keep leaving the sun and the sea,
but my heart lies waiting over the foam.
I still call Australia home.

All the sons and daughters spinning ’round the world,
away from their family and friends,
but as the world gets older and colder,
it’s good to know where your journey ends.

But someday we’ll all be together once more
when all of the ships come back to the shore.
Then I realise something I’ve always known.
I still call Australia home. 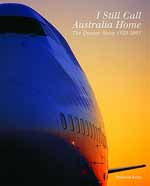 See the Chaser’s War On Everything spoof of the Qantas ad, made in 2007 with reference to the proposed sale of Qantas to overseas owners. Click on the image below to play the video.