Australians are being teased by an ancient 100-year-old soccer fan who believes that the Socceroos, the Australian national team, have no chance in the FIFA 2006 World Cup. It’s all part of a campaign by Nike Australia, rolled out on Australian television channels 9, 10 and SBS and on a MySpace web site. 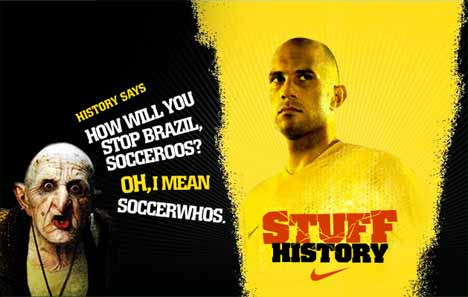 Two 60 second ads feature a very old man sitting in a rest home, waiting for his nurse to come and turn on the television.

“So, Australia. Tonight you play Greece. But I say you don’t have a chance. They are the European champions, ranked number twenty one in the world. You know where you are? Forty four! Even Honduras is rated above you! Ha ha ha! Honduras! I know you’re going to the finals in Germany. But you have no chance against Brazil. The inventors of the beautiful kick.”

The nurse arrives and says “Look, History”, as she turns on the television. Brazil is featured.

“Just play it! Oh Joga Bonito Ronaldinho! How will you stop that? Socceroos? Or I mean Soccer Whos? Ha ha ha!”

The super: “History’s Against Us. Stuff History! Nike.”

Australia did in fact win against Greece that night.

What Chance Do You Have In Germany?

“So Australia. Finally you’re going to the Cup Final. And I say you don’t have a chance. Sure, you beat Uruguay. On penalties. But who else? The Solomon Islands? Rank one hundred and forty in the world? Ha ha ha ha! But you have no chance against Brazil. Five times world champion! More than anyone! The inventors of the beautiful kick. The kings of football. Oh sorry soccer team full of stars.

Once again, the nurse comes in and says, “Look History” as she turns on the soccer.

“Just play! Oh Joga Bonito Ronaldinho! How will you stop that? Socceroos? Or I mean Soccer Whos? Ha ha ha!”

The super: “History’s Against Us. Stuff History! Nike.”

Australia indeed are not the hot favourites at the FIFA World Cup. Their first match against the Netherlands promises to be a real challenge.

History has trouble keeping up with the Socceroos.

How will you stop Ronaldinho? Cristiano’s masseur has a few moves to deal with History. 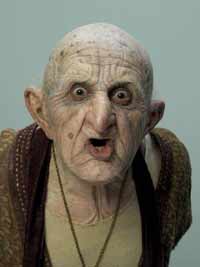 History has his own web site at MySpace: www.myspace.com/historysays where he’s showing the videos.

In his profile he writes, “I’m History I know everything because I was there, these days I spend most of my time in a old peoples home, watching stuff and beating everyone else at Trivial Pursuit.” He enjoys watching the History Channel, reads Encyclopedias and counts Ronaldinho and Ronaldo as his heroes.

The ads are available to view in Vividas format at www.stuffhistory.com.au