The Danish Road Safety Council this month launched a viral campaign designed to draw attention to the speed limits on Copenhagen roads. A short documentary (2 minutes 30 seconds) tells the world about the Speed Patrol Bikini Bandits, topless blondes who stand at the side of the road holding speed limit signs. 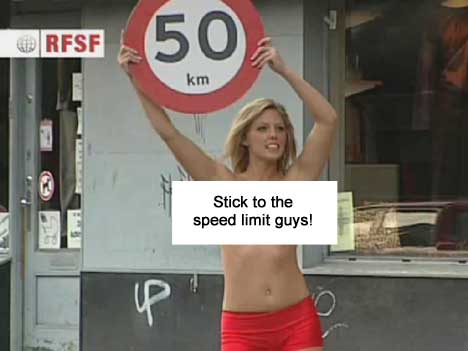 Spotlight on the World, a fictional RFSF news program, brings a story from Bart Sweeney in Copenhagen. “For years the Danes have had a tolerant and casual attitude towards just about everything – from sex, to drinking their beloved beer. Even to casual speeding. There is a positive trend. But seven out of ten motorists are still pushing the limit. But now the Danes seem to have become less tolerant of speeding motorists and they’ve come up with a rather innovative solution.”

“Make way for the speed control Bikini Bandits. A specially trained team of enthusiastic young women not afraid to do whatever it takes so that motorists pay more attention to the speed limit.”

Heidi Svendsen, head bandit says, “Sure what we do is extreme but I know from my heart what we are doing is working. People are slowing down. People are noticing.

It’s a fantastic idea. It’s really kind of obvious. Why didn’t they think of this sooner? A turban wearing taxi driver is asked, “What do you think about the Bikini Bandits?” “The Bikini Bandits? Denmark has redeemed itself!”, he says. But the plan wasn’t entirely foolproof, says Sweeney. Brent Koch Hansen, Traffic Police, says, “In the beginning the Bikini Girls worked great. But let’s say it wasn’t entirely thought through.” One could argue that traffic in Copenhagen and much of Denmark has come to a total standstill, thus pushing the tolerance level of many Danes. A woman says to the camera, “I don’t like them and I know a lot of others that feel the same.”

Heidi responds, “I couldn’t care less what anybody said. If people are slowing down we’ve done our jobs and since we’re the world’s best we will continue to do our jobs.” 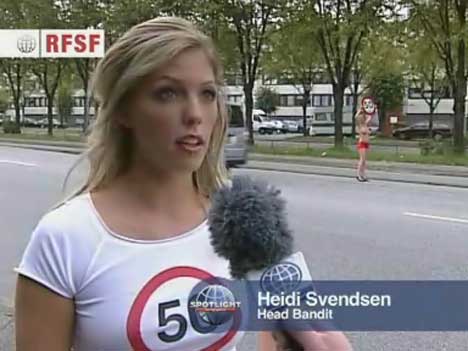 Sweeney concludes, “There you have it. Denmark’s Speed Patrol Bikini Bandits. Like them or not, now Danish speed limits are rarely ignored and nearly impossible to miss.”

The campaign was released at www.speedbandits.dk on November 6 and has since been hosted on YouTube, blogs and other sites and viewed by thousands around the world.

The Bikini Bandit campaign was designed at Small But Global with filming directed by Peter Harton at Far From Hollywood, Copenhagen.