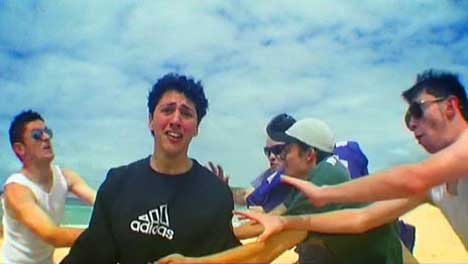 “We packed you a cone”, say two guys smoking dope as they look out over Sydney Harbour. “We got the ethnics off the beach”, says a young man in sunglasses, as a gang of his colleagues chases an unfortunate beach-goer. (An Australian interpretation of the phrase Beach Bash). “We got you some free accommodation”, says a uniformed woman at Villawood Immigration Detention Centre. 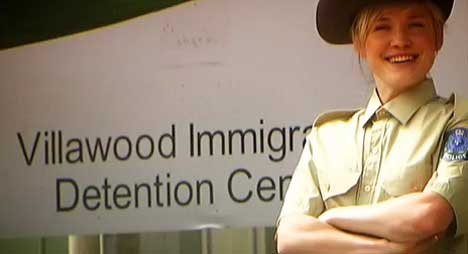 “And the dingoes are well fed”, says a bush warden, feeding a crying baby (doll) to a leashed dingo. “And our human rights record has been improving for over 200 years”, says a coloured man as he’s attacked by police. Finally the pursued beachgoer runs up to the camera and appeals, “So where the f-ing hell are you?”, before being set upon and beaten. The Australian flag is flaunted by one of the thugs.

The spoof was directed by Dan Ilic, executive producer of Downwind Media

What perhaps has most caught the attention of the press is the response from Tourism Australia. Downwind Media were forced to remove the spoof from their web site because of their use of the music from the original Tourism Australia ad. The response was the release of four new ads with slightly amended soundtracks. Instead of ‘Da Da Da’ they have the words ‘Do Do Do’, ‘La La La’, a whistle version, and a remix by Fatt Dex featuring Crazy Bunyip.

Downwind Media will be enjoying the attention they’re getting. From small beginnings as a web and graphics design hobby in 1999, Ilic has gathered around him a group of directors producers, writers and designers who have won work for BM, The Australian Olympic Committee, MTV Australia, and FBi Radio. This is a company that believes the future of video advertising is in broadband access by emerging generations of viewers.

Fatt Dex is the collaborative work of Leonardo Esposito, a Canberra-based music producer.

One Reply to “Where The Spoof Are You?”