Visa gained the attention of television viewers in 2003 with ‘Tuk Tuk’, featuring Pierce Brosnan in Bangkok. A limousine drives through the streets of Bangkok, only to be thwarted by a traffic jam. Pierce Brosnan winds his window down and catches the eye of a tuk tuk driver, played by Bangkok comedian Vichai Jongprasitporn. In case we haven’t twigged to the passenger’s identity, the limo driver says “Mr Brosnan?” as Brosnan climbs in to the tuk tuk and gives his destination. 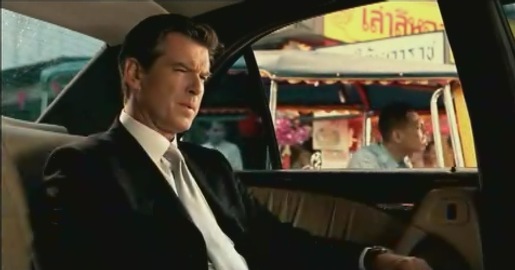 The driver, delighted to have James Bond in the back seat, revs the engine and pulls a wheelie, beginning a stunt-filled and effects-laden ride through the alleyways, restaurants and shops of Bangkok. The tuk tuk arrives at the hotel just as Brosnan’s dining partner pulls up in a limousine. Zhang Ziyi, known for her role in Crouching Tiger, Hidden Dragon, steps out and apologise for being late. “The traffic was a killer.” The tuk tuk collapses, totally exhausted by the trip across town. Brosnan reaches for his jacket pocket and throws what appears to be a ‘weapon’ toward the driver – in fact a Visa card showing Pierce’s name and Visa number. The super: “Need Repairs?” Later in the evening the tuk tuk driver pulls up with a brand new tuk tuk, revving his engine and beckoning for Brosnan and Zhang Ziyi to join him. Brosnan’s not too sure but is led on by his dining partner. The tagline: “Visa: All it takes.”

In Visa’s behind the scenes documentary Danny Searle explains that viewers had warmed to the daring display shown by Zhang Ziyi in the earlier spot, “Dining Out”.

The Tuk Tuk spot was directed by Matt Murphy via Good Oil, Sydney, with director of photography David Burr. 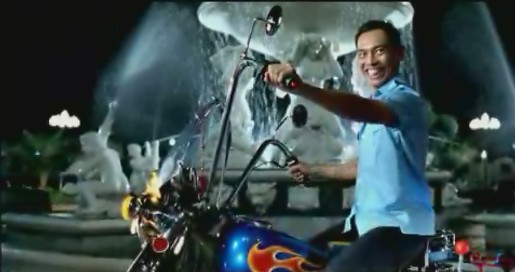 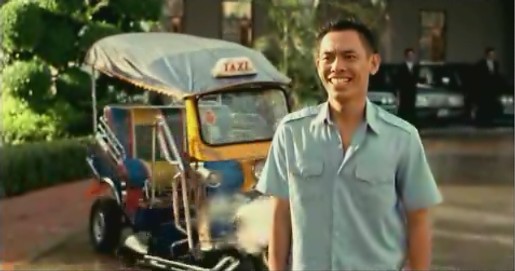 Andy Lambert, director of advertising for Visa Asia, explained that Bangkok was seen to be in the heart of Asia. In the third part of Visa’s behind the scenes documentary, Igor Nay, production designer, points to a serene moment in the Tuk Tuk spot in which a tailor continues work while the Tuk Tuk crashes past. The ‘hero tuk tuk’ included strengthened roll bars and a 550 cc engine to help with the stunts.