ASB‘s campaign to launch pago in New Zealand has received a number of top-ranking awards in Cannes this last week.

The pago campaign has received five honours at the Cannes Lions International Advertising Festival including a Grand Prix. The Festival is regarded as the most preeminent international advertising festival, this year attracting 25,000 entries received from 80 countries. pago was awarded a Media Grand Prix in the ‘Financial Products & Services’ category; a Bronze Media Lion in the ‘Best Use of Ambient Media: Small Scale’ category; another Bronze Media Lion in the ‘Use of Mixed Media’ category; a Bronze Direct Lion in the ‘Alternative Media’ category for the pago Money Sticker; and a Promo Lion in the ‘Best Integrated Promotional Campaign’ category. The campaign is also shortlisted in the Titanium and Integrated Lions awards.

“We are absolutely rapt”, says Peter Muggleston, Group Manager ASB Online & Info Services, ASB. “This is a massive achievement for our campaign and it’s fantastic to be recognised on the global stage.”

The most striking feature of the “Money Goes Digital” campaign was tiny ads stuck on genuine banknotes as peel-off stickers. The NZ$5 note was stickered and seeded into circulation at the Big Day Out and key youth retailers. Using hypertag and bluetooth technology festival punters could download free money vouchers to their mobile phone. The stickers were attached with permission from the New Zealand Reserve Bank and Sir Edmund Hillary, the NZ icon whose face is on the five dollar note. 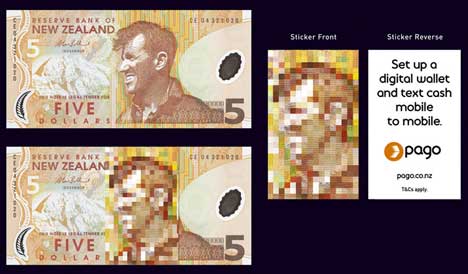 The campaign team commissioned NZ artist Maurice Bennett to create a mural at Britomart, the Auckland Central train station, using 30,000 Post-It notes to represent a pixilated five dollar banknote. Commuters were able to help themselves to the post-it notes. Bennett is known as the ‘Toastman’ for his ambient art using pieces of toast. 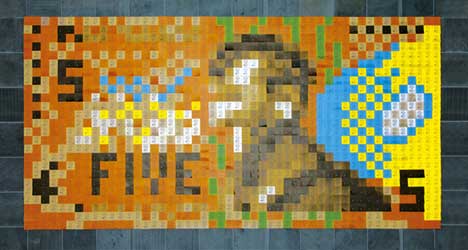 Launched in New Zealand in November 2006, pago is a new payment service, allowing money to be sent from one person to another using their mobile phones or email. The pago service is available to people with a mobile phone or e-mail address who also have a New Zealand bank account which is accessible online.

See my post on the Whybin TBWA award-winning All Blacks Bonded By Blood campaign.

The Whybin/TBWA team, in their submission to Cannes, describe the ASB project as beginning with a dream brief. ASB demanded and (research supported) non-conventional advertising. The prospect target was defined as ‘Digital Natives’ – a tech savvy youth audience. Although highly cynical of conventional marketing messages, they are captivated by innovation and digital development. The strategy was to capture attention through new technology and media innovation reflective of the Pago brand. The media solution discovers new touch points and embodies genuine media innovation.