U2’s music video, “New Year’s Day”, is one of the videos included on the new 18 DVD. The 4:15 minute video features the band playing in the wintry snowbound countryside of Sweden in December 1982. Inspired by the anti-war messages of the War album, the music video shows band members on horses, carrying white flags through a snow-clad Swedish forest, justaposed with footage of World War II winter conflicts. 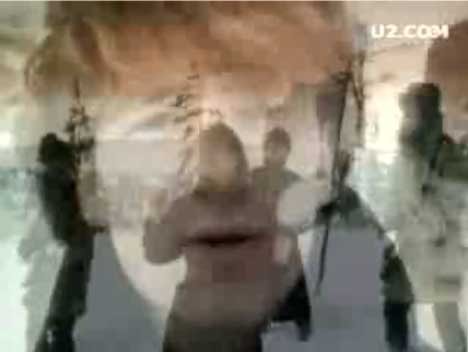 Director was Irish director Meiert Avis, who is now based in Santa Monica, Los Angeles, with producer James Morris and director of photography Tony Forsberg.

Meiert writes on the U218 site:

“This video only really makes any sense at all in the context of the lyrics of the album version, “Gold is the reason for the wars we wage.” Making U2 videos is a challenge, because the way Bono writes lyrics, often involves stripping out all the specifics of the original inspiration. What’s left is poetic, universal and wide open to subjective projection. That’s why everyone can relate U2 songs to their own lives. However, the visual part of the brain is differently wired and continually looks for meaning and linear narrative to hook into. Good luck finding that with this video. Maybe a Kurosawa movie played in Dublin that year? The shoot was brutally cold. There are bottles of whiskey buried in the snow all around, some probably still there. The band eventually were carried away rigid, like Jack MacGowran in “Fearless Vampire Killers”, and so we had to find some Swedish girls to do the horse riding scenes. I wish they had put my “All I Want Is You” video on this DVD instead.”

Under a blood red sky
A crowd has gathered in black and white
Arms entwined, the chosen few
The newspapers says, says
Say it’s true it’s true…
And we can break through
Though torn in two
We can be one