Apple is promoting the iPod Touch with a new TV ad, “Grid”, featuring the song “What I’m Looking For” by Brendan Benson. Fingers are used to navigate the iPod – on the screen, beginning with the music selection menu, choosing the Brendan Benson album, Alternative to Love. We’re given access to international weather, showing that the temperature in Portland is 46 degrees compared to 79 degrees in Honolulu.

A word processing feature for ‘my to do list’ morphs into web browsing and email access. Heidi Luko is encouraged by Katerina Vardiaba to “check this out” – movie selection including home made dance video and Napoleon Dynamite. More music, this time Sleeping Lessons by The Shins album Wincing the Night Away. The hands scroll through photographs, and using two fingers, zooms in on one of them. On another iPod we’re able to check out friends updates on Facebook. Google Maps for finding Starbucks, Nylon TV (The Lengend of Girbaud), more music by Jack Johnson and LCD Soundsystem, snowboarding video, it’s all there on the table of iPods. Something for everybody. Everything but a phone. “Everybody Touch.”

Filming was directed by Mark Coppos and Virginia Lee via Green Dot Films, with director of photography Robert Doumitt.

Editors were Glenn Martin and Jared Coller at Nomad Editing Company. Post production was done at Company 3 by Brian Robinson and Stefan Sonnenfeld, and at Mork & Lys by Kevin Shapiro and Brandon Sanders. 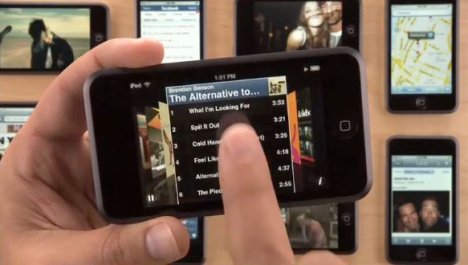 Lyrics for What I’m Looking For

I used to be involved, and I felt like a king
Now I’ve lost it all and I don’t feel a thing
I may never grow old, I may never give in
And I’ll blame this world that I live in
I visit hell on a daily basis
I see the sadness in all your faces
I’ve got friends who have married
And their lives seem complete
Here I am still stumbling down a darkened street

One Reply to “iPod Touch Grid for Everybody”