Andrew grew up in Orewa, New Zealand, before moving to Perth in Western Australia. Tonight we heard about Andrew’s early fundamentalist street evangelism days – the importance of having a go and having encouragement to try things out. Since those days in the early 1980s Andrew has spent time working in and out of the United States, in Prague, in a campervan travelling around continental Europe, and now living in the Orkney Islands, Scotland. 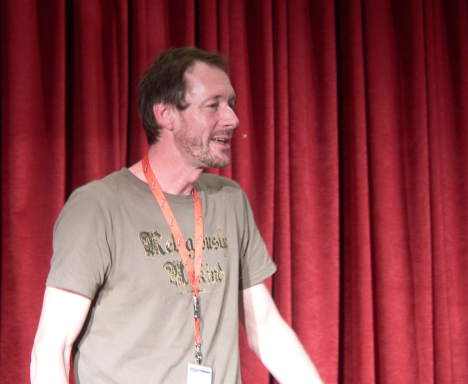 Andrew is one of those guys who has you on the edge of your seat, wondering how it’s all going to turn out. He’s self-deprecating (as Kiwis know how), witty, and insightful, sometimes appearing to be surprised by the gems of understanding he passes on to us.

Tonight’s gems came from an exploration of what church planting looks like from a rhizome framework rather than multiplication model. He talked about the diversity of rhizomes, and the spreading wide rather than building high approach to sharing ideas, values, beliefs and action. We heard about the connection Gilles Deleuze made with the rhizome biology and philosophy, and how that inspired the World Wide Web framework.

Andrew’s thoughts on being prepared to risk reputation and associate with weirdos was a timely reminder to the Australian missional church movement not to be afraid to associate with those American Emergents who have been slated for their sloppy theology. Not that Andrew said that directly. But the message was there loud and clear in his own experience of moving from the position of a fundamentalist Baptist to a more relaxed Baptist who is available to work with whoever God places him with.

Hey – it was good to see a fellow Kiwi in action.

One Reply to “Tall Skinny Kiwi on Grass Roots”