Volkswagen continued its theme of the small but tough Polo in ‘Cops’, an award-winning print advertisement launched in July 2003. Stereotypical American police officers take refuge behind a VW Polo during a gun battle.

TBWA\PARIS made a reference to the Cops ad in their promotion of the Nissan 350 Z as “la plus belle voiture de l’année” (voted the most beautiful car of the year). Instead of sheltering behind the car, the cops are protecting the car. 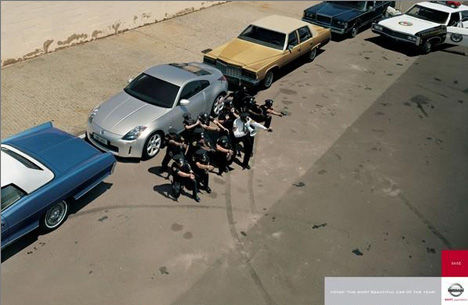 Sydney agency BMF Advertising claimed in July 2004 that it presented the Cops concept to VW in September 2001 as part of its pitch for the Australian advertising account. Warren Brown, who presented the idea in mock ups for print and TV ads, said to the Sydney Morning Herald, “It’s a remarkable coincidence and quite amusing that you show an ad to a potential client and the idea turns up on the other side of the world,” he said. “It just goes to show you can’t keep a good idea down . . . that in the great ether of creativity our idea was plucked by the guys in London.”

Richard Morris, a director of DDB London, said: “We devised the original concept for ‘Cops’. We were unaware of any other agency presenting any sort of similar concept to VW in Australia and in any case would never countenance commissioning any idea not devised by our own agency.”