The Great Emergence, by Phyllis Tickle, is a book published by Emergent Village in association with Baker Books, designed to broaden and ground understanding of the emerging church movement in the United States. 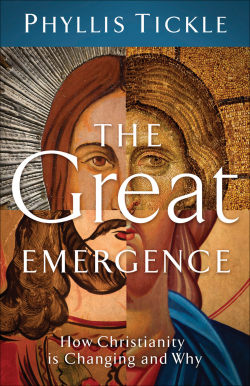 Phyllis Tickle says that we’re in the middle of a huge transformation in the way that Christianity is understood. “The Great Emergence”, she says, is the latest in a series of changes associated with historical events, in the line of the Great Reformation (linked to 1517), The Great Schism (1054), and Council of Chalcedon, Fall of Rome and Gregory the Great (590), and at the time of Jesus, the Great Transformation or Change of the Eras.

Phyllis says that we’re seeing a new expression of the Christian community that is radically Jesus oriented, post denominational, post Protestant, using virtual reality, internet-based, looking for alternatives of exclusivism, and searching for passionate elements of liturgy that sustain life.

The Cable of Meaning

Phyllis uses the metaphor of multi-layered cable to help us understand the ways in which religion is kept stable for many years, then changed because of cultural influences. Three strands in the centre, spirituality, corporeality and morality, are wrapped together by a mesh sleeve of common imagination, protected on the outside by the story of community. Every five hundred years, Tickle says, the outer layers are “pocked” enough for us to take out the interior braid to examine, change and repair. 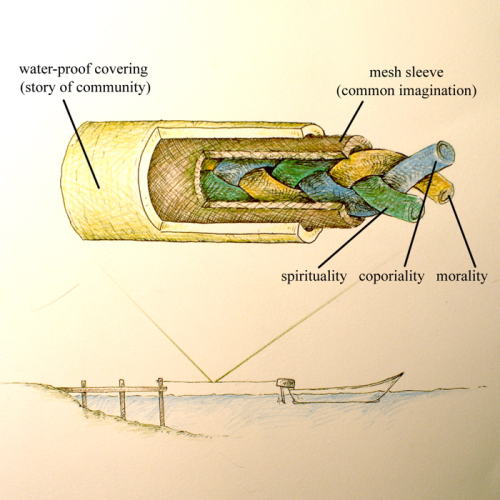 The image here comes from an interview with Phyllis on The Nick and Josh podcast, illustrated by Justin Banger.

Phyllis describes the Great Reformation as a process of rethinking sources of religious authority, provoked in part by the disintegration of European unity and the simultaneous appointment of three popes. The resulting chaos led to a new consensus in the Protestant movement, providing us with the concept of Sola Scriptura (Scripture Alone). The requirement that all people be able to read the Scriptures for themselves (priesthood of all believers), led to a massive effort to build universal literacy. Phyllis points out that alongside the Protestant movement was the Counter Reformation, a renewal and re-ordering of the Roman Catholic community. It is helpful to have this analysis of the issues brought about by the Reformation, however the one chapter is not adequate to do justice to the philosophical currents of modernity that shaped this time.

Phyllis suggests that advances in biology (evolutionary theory) and physics (forces rather than matter), pocked the Cable of Meaning in the late 19th century. She explores the roles of significant leaders in the development of what we now regard as the scientific community: Charles Darwin, Michael Faraday, Sigmund Freud, Carl Jung and Joseph Campbell. The development of psychology as a discipline, she says, led to a concepts of shared humanity that challenged the North American Christian doctrines of particularity and exclusivity. The emerging questions of this era are “What is human consciousness and / or the humanness of the human? and “What is the relation of all religions to one another?”

The Century of Emergence

Albert Einstein’s Theory of Relativity, and Heisenberg’s Uncertainty Principle, are described by Phyllis as the foundations for a the discipline of literary deconstruction that led to a pocking of the “Sola Scriptura” layer of the Meaning Cable. Albert Schweitzer’s book, The Search for the Historical Jesus, along with the Pentecostal movement, brought the concept of uncertainty into the religious realm, allowing for a growing sense of subjectivity. Social change was made more possible by increased mobility rupturing inter-generational conformity. Local churches, however, attempted to develop an environment of social control by linking codes of conduct with the construction of basketball courts, swimming pools and fellowship halls, attempting to become the centre of their members lives.

Phyllis slows down here to explore the move away from religion towards spirituality. She names significant factors in the United States: the generic sense of God in the Alcoholics Anonymous movement, the opening up to immigrants from Asia, and experimentation with drug-induced states of consciousness. The Protestant insistence of Sola Scriptura was not adequate for the rethinking needed on divorce, homosexuality, abortion and the role of women in the home and workplace.

Phyllis observes that the Christian community in the United States is experiencing a convergence, in which previously separate and distinct expressions of church, liturgical, social justice, renewal and conservative, are found together in many combinations. The departure of younger generations from the mainstream churches has led to a variety of expressions of church that refuse to buy into the inherited focus on “Sola Scriptura” or heirarchical authority. In the meantime, we can find the equivalent to the Catholic Counter Reformation in the “re-traditioning” Christians who are refurbishing their church environments. Close to them are the “Progressives” who often stay in the traditional framework but seek to let go dogma-based ideas and doctrinally-restricted governance and praxis, re-modelling their environment. Phyllis talks about “Hyphenateds”, the Presby-mergents etc who hold together their inherited tradition with emerging expressions of church. At the centre, she says, are the people who are pulling together elements of each of the four quadrants of church without needing to belong to the inherited institutions of the past.

Where is Our Authority

Phyllis concludes with a section on where we find our authority in a Post Protestant era. We’re needing to recognize that our bases of authority are expressed in our understanding of orthodoxy and orthopraxy. Alongside these, however is the concept of orthonomy, the use of aethetic or harmonic purity as a tool for discerning the truth, and theonomy, in which God is seen as the source of authority. The Emergent concept of “conversation” is provided as an example of networked authority founded in “center set” Christianity.

Phyllis Tickle is a lay eucharistic minister in the Episcopal Church, a senior fellow of Cathedral College at the National Cathedral in Washington DC, known for her Divine Hours prayer manuals.

Phyllis on The Great Emergence