It’s been a rough few days for Australia, first with floods in North Queensland, and now with the terrible devastation of fires in Victoria. Sydney’s press was preparing for the worst temperatures on record on Sunday. But it was the regional areas around Melbourne that were hit by the combination of temperatures in the high 40s, strong winds and thunderstorms on Saturday. I heard about the emerging extent of the disaster on Twitter, with Duncan Riley keeping his 5000 plus followers up to date. On Sunday morning we were being told that the fatalities were likely to top 40. It’s now Tuesday morning, and we’re being told to expect figures over 240. What stuns me is the realisation that whole towns have been razed, with almost every building burned to the ground. Marysville, an alpine village with perhaps 600 residents outside the skiing season, is gone. Kinglake, another national park village, destroyed. I’ve included here an image from Google Maps street view of Marysville before the fires. 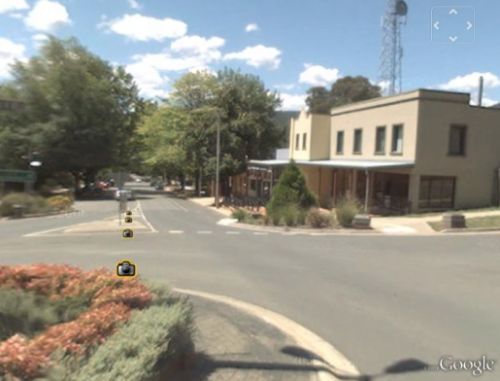 The Uniting Church, of which I’m a member, today released $50,000 from its National Disaster Fund to enable the church in Victoria to provide for immediate emergency relief, and is launching a national appeal for funds which will be used by the church for both emergency relief and the longer-term pastoral care and rehabilitation for families in need.

All congregations of the Uniting Church will be asked to hold retiring offerings in the next few weeks, and individuals can give tax-deductible donations directly to the appeal.