In a press release in March this year the Kaiser Foundation released its findings on the emerging generation it named as “Generation M: Media in the Lives of 8-18 Year-olds”. 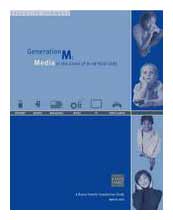 The study, Generation M: Media in the Lives of 8-18 Year-olds, examined media use among a nationally representative sample of more than 2,000 3rd through 12th graders who completed detailed questionnaires, including nearly 700 self-selected participants who also maintained seven-day media diaries.

The executive summary of the study (#7250) and the full report on which it is based (#7251) are available on the Kaiser Family Foundation’s website at http://www.kff.org/.