It’s a typical day in Toronto. People travel by bus, taxi, train, bicycle, car. But today something is different. There’s a new face to the city today. A baby face. The voiceover: “When something great happens you want everyone to see it. That’s why there’s now a network that lets you be the first to take send and receive images mobile to mobile. Life’s better with pictures. Get more. T-Mobile.” 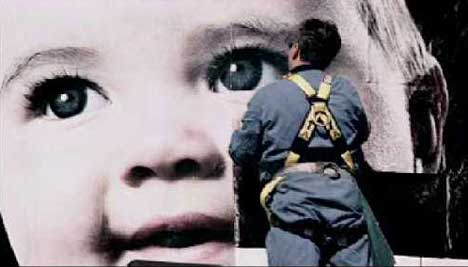 The same image, a baby smiling for the camera, appears twenty times in the city.
1, 2, 3 News agent’s stand
4, 5 Cafe newpaper and on the coffee mug
6. Being pasted onto a huge billboard (see picture)
7. Moving on a pedestrian’s sandwich board
8. Featured on a hotdog stand and on newspaper stands
9. Electronic billboard reflected in a puddle
10. On the side of a bus as it passes an alley
11. In a shop window
12. On another billboard
13. In a laundry, on the clothes spinning in front loading dryer
14. Back to the newspaper stand by the hot dog stand
15. Through a moving train we see the photo on the side of the railway platform
16. On shopping bags getting out of a taxi
17. Plastered to a sidewalk
18. In the photocopying room
19. Back to the huge billboard
20. Screening on a stadium billboard
21. Mobile phone capturing the image of a baby

T-Mobile UK, formerly One 2 One, is the UK network of T-Mobile International, which in turn is one of four divisions of Deutsche Telekom, Europe’s second-biggest telecom company. T-Mobile UK was launched in April 2002, succeeding the One 2 One company. 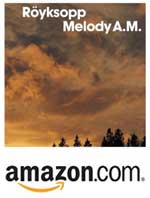 Part of the mystique of this 2002 T-Mobile TV ad is the soundtrack, “So Easy”, provided by Norwegian Duo, Röyksopp. The ambient electronic dance number was the first track on Röyksopp’s album, Melody AM, released by Wall of Sound in October 2001. Torbjørn Brundtland and Svein Berge recorded “So Easy” by sampling a cover of Burt Bacharach’s “Blue on Blue” by 1960s Swedish vocal group Gals and Pals.