William Lawson’s, the Scotch whisky owned by Bacardi-Martini, was promoted in 2000 through a Scottish reply to a New Zealand Maori haka. The TV ad begins with a team of Scotsmen wearing only kilts, running onto a stadium to play rugby union football. As the crowd cheers a New Zealand Maori team run on, sparking a Mexican wave. 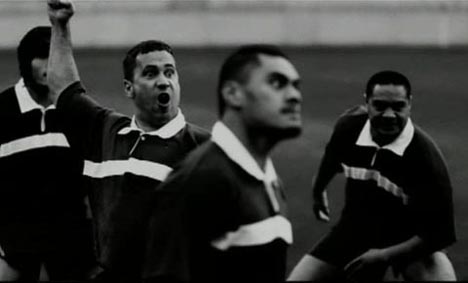 The Maoris line up for the haka, the traditional dance used as a challenge for combat. As they go through their stirring performance, the Scots stand there in their boots, resolute. At the end of the haka, the Scotsmen produce their own cultural challenge, silently lifting up the front of their kilts. The super and voiceover: “William Lawson’s. No Rules, Great Scotch.” Click on the image below to play the video.

The haka spot was shot in the Westpac Stadium in Wellington, New Zealand.

Filming was shot by director Olivier Venturini via Pix & Motion, Brussels, with director of photography Danny Hiele, executive producers Brigitte Baudine and Kato Maes. Pix & Motion have since joined with Roses are Blue to form Caviar.

The Effie Awards of Belgium recognised the effectiveness of the Haka campaign in establishing William Lawson’s whisky in Belgium as the drink of irreverence, virility, authentic Scottishness, impertinence and humour. At the same time there was no connection made between consumption of alcohol and sporting or sexual performance.

In 2004 McCann Erickson Belgium followed up the haka ad with ‘Scottish Instinct’, set in a hotel lobby. One of the bare chested kilted men encounters a man and a woman, creating an effect on both as he crosses his legs. The campaign was developed by creative director and art director Jean-Luc Walraff, directed by Barry Myers at Michael De Wouters Production House. Account Manager was Nathalie Marchand.

7 Replies to “William Lawson’s Response to the Haka”