A young man wakes up in bed, looks at the window and screams. His father enters the room and screams. As does his brother, two policemen, an axe-wielding fireman and an ambulance officer. Is the window open? Yes
Does he see a face? No. Does he see an animal? Nnnno. Sorry… this isn’t another of those lateral thinking puzzles. It’s an Australian Grosby TV advert. The young man’s seen two furry foot in the window, and assumed the worst. In fact it’s his girlfriend climbing up the spouting, wearing furry slippers. 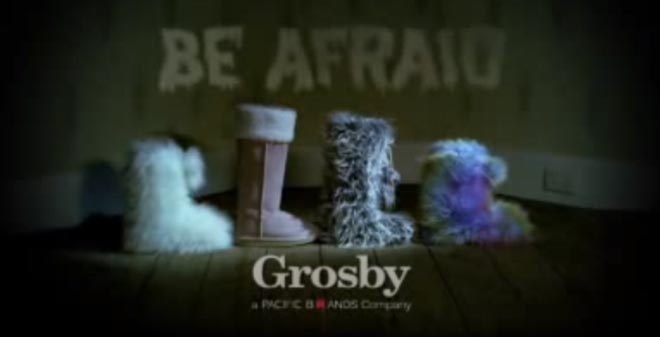 Grosby, the brand name, comes from the Grosnovsky family, originally from Minsk, Russia, who set up a slipper factory in Melbourne in the 1930s. The family firm eventually expanded into shoes and linked up with Dunlop. They have been promoted by their mascot, Grosby the puppet dog, saying “Grrosby, they’re grreat mate, woof”. And now they’re promoting furry slippers. Horrors! Be afraid.

Filming was directed by Tony Rogers at Renegade Films with producer Joe Connor.

One Reply to “Furry Grosby Slippers in Window”