Volkswagen’s Touareg SUV features in a well thought out campaign linked with the recently released movie, King Kong. The TV ad opens on the streets of New York, 1933. King Kong is not happy and is throwing cars around. People are running everywhere to get out of the way of the flying cars. The scene ends with snow being splattered over the camera’s window.

Scene two – windscreen wipers clear the snow from the window. The camera swings round to show us a snow-topped VW Touareg. Out jumps the cameraman. Holding a Starbucks red cup and bagel he says, “Looked great to me!” The rest of the crew, covered in snow, are not so happy. The dry cameraman asks, “Donut anyone?” The text appears with the sound of the crew walking through the snow. “The Touareg. Official member of the King Kong Crew. Aus Liebe zum Automobil.”

Here’s the Volkswagen press release from November 28, with my hyperlinks added…

New York 1933: a giant ape is rampaging through the streets and anything not nailed down is thrown through the air – a scene from the new film “King Kong” by Peter Jackson – and Volkswagen‘s Touareg is at the center of the action. A crew member is sitting in the vehicle and, of course, remains unharmed.

With this TV campaign, Volkswagen has moved into the third phase of its partnership on the film “King Kong,” which started with an exclusive online presentation of the first “King Kong” trailer and continued with the Touareg “Kong” stand at the International Auto Show in Frankfurt. The highly acclaimed TV campaign – establishing Volkswagen’s sports utility vehicle, Touareg, as an “official member of the King Kong crew” – kicked off on November 1 in Europe and made its debut in the U.S. November 29.

It was Volkswagen’s strategy to remain as close as possible to the film with its advertising message. Volkswagen’s agency Grabarz & Partner thus developed a campaign, which Universal offered to have produced by Peter Jackson’s team in the King Kong setting. “This was an unique offer that we obviously happily accepted,” says Jörn Hinrichs, head of marketing at Volkswagen.

It was also an extraordinary move for NBC Universal. “We wanted to ensure that everything was presented as authentically as possible,” says Stephanie Sperber, executive vice president of Universal Studios Partnerships. “And what better way to ensure this than to have the same team produce the film, produce the campaign.

“Weta Digital, the Academy-Award-winning visual effects facility based in Wellington, New Zealand, delivered the same computer graphic images (CGI) used in the film to achieve a seamless integration with the Touareg appearing as if it was a sequence of the film itself.

Carolynne Cunningham, Peter’s Jackson’s assistant director for King Kong, directed the Touareg spot on behalf of Volkswagen. Under her direction, Academy Award winner Dan Hennah delivered a custom set for the production, and the director of photography Andrew Lesnie, also an Academy Award winner, created the atmospheric light of a 1933 New York winter night together with his lighting team.

In addition to the television campaign, Weta Digital also delivered a print campaign that married the Touareg in various executions with production crew in the wilderness of the Skull Island jungle and the concrete jungle of New York in 1933. 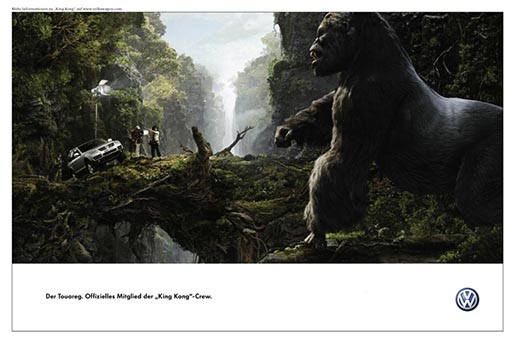 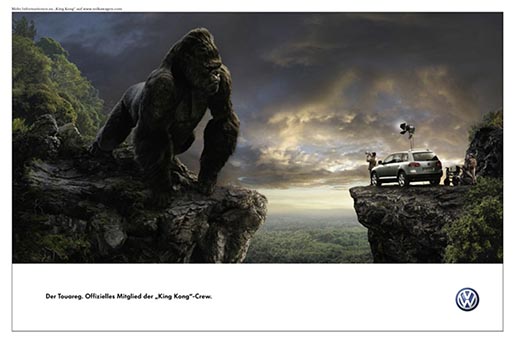 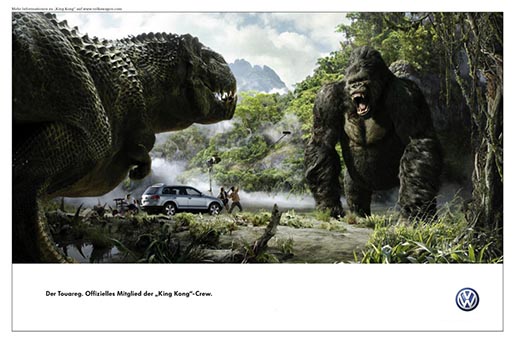 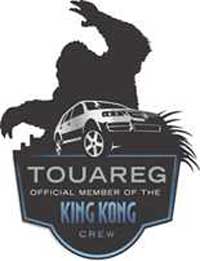 Volkswagen has launched a limited edition version of the SUV Touareg for the European market. The following comes from the Volkswagen December 8 press release…

Inside the King Kong Touareg has leather seats, “Engine Spin” design garnish trim, and a 4-spoke steering wheel. Rear passengers are able to watch the video screen on the move with wireless headphones and a 7-inch screen integrated into the headliner. Other features are fully-automatic “Climatronic” air conditioning system with 2-zone temperature control, a parking distance warning system (front and rear distance warning with audible and visual signals), and fog lights. All of course very handy on the set of King Kong.