As I walked into Ignite, the regional youth event held at Redcliffe Uniting last month, I was recruited as a professional soldier. I was handed a Berserker sub machine gun, given a combat outfit to wear, and introduced to two fellow soldiers. Our task was to engage in guerrilla warfare with teams of three young people at a time, taking out our opponents by shooting just above the eyes.

These weren’t real guns or real bullets. We were playing Laser Skirmish, firing infra red rays like those emitted from television remote controls. On the backs of our orange t-shirts someone had plastered the words hatred, apathy and greed. Young people were being challenged to fight against injustice rather than against people.

So what do you think? Was this a great way to get young people talking about the issues behind war? Or was it just another way of feeding and exposing the blood thirst in all of us?

I must admit I enjoyed myself. I coped fine with the adrenaline rush of keeping myself alive by taking out members of my youth group and their peers. I nearly lost my voice as I rooted out resistance in the trenches with my battle cries.

But afterwards I got to thinking. These young adversaries may have taken on the cause of defeating all kinds of evil. But too readily it was us against them. The people in the orange shirts wore the labels and so had to be eliminated.

Labels hardly ever describe accurately who we are. People are human and don’t fit into boxes without being squashed and reduced to a caricature. Likewise God is divine and does not fit neatly into any box we might dream up.

The very act of pinning the weight of evil on a character, be it Saddam Hussein or the molester in the news, prevents us from dealing with our own shadow – our own capacity to distort God’s gift of life.

In the time of McCarthyism in the 1950s, the enemy was communism. Individuals and groups were singled out for harsh treatment and rejection – because of their perceived lack of loyalty. I’ve seen the same dynamic at work in churches sick with mutual suspicion and fault-finding. 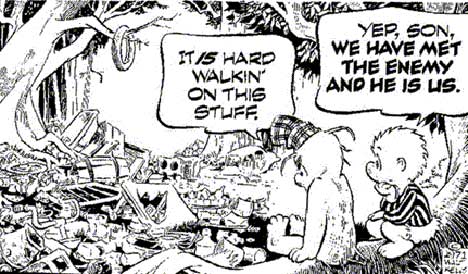 “Yes, son, we have met the enemy and he is us”. Famous words from Pogo, a cartoon character possum created by Walt Kelly in the middle of last century. Pogo sighs out those words not in the battlefield but at the edge of a junk-filled swamp. Walt Kelly’s words below remind us to dedicate our resources to the battle raging within each of us.

“There is no need to sally forth, for it remains true that those things which make us human are, curiously enough, always close at hand. Resolve, then, that on this very ground, with small flags waving and tiny blasts of tiny trumpets, we shall meet the enemy, and not only may he be ours, he may be us.”

One Reply to “We have met the enemy”