Tooheys New relaunched their brand today online with a larger than life television “For the love of beer” advertisement, ‘Catapult’. Billboards have been seeding curiosity over the last month, leading members of the public to register their email address at www.fortheloveof.com.au. 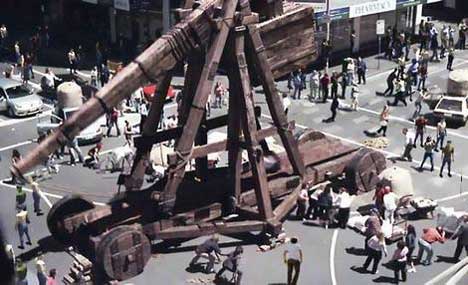 Today the ad has gone viral in Vividas format at www.fortheloveofbeer.com.au. The TV ad will be launched on Australian televisions on Sunday February 19. The spot features desperate men and women in the street of Melbourne, using a giant trebuchet to fling beer ingredients into the rain clouds. Barrels and sacks of sugar, yeast, hops and malt are lobbed into the air. Two young women take the bungee ride of their lives, though we don’t know where they land. Finally, a stag, the emblem of Tooheys New, appears on the scene. Off it goes, joining the heavenly ingredients. The climax of the commercial is the beer itself – pouring down from the sky. Click on the image below to play the video.

Saatchi & Saatchi Executive Creative Director, David Nobay, comments, “In some ways, the concept behind ‘Catapult’ is completely insane, and yet the idea of wanting it to rain beer is also entirely plausible. When your lips are parched and the sun is up, a great beer certainly feels like a gift from the Gods. Tooheys New has just brought the dream to life for all to enjoy.”

“A shared glass of beer is like an invisible handshake. It’s the great Aussie unifier. And yet, for too long, the imagery behind mainstream beer has been skewed to such a narrow blokey bias that it has the opposite effect. It’s like a club you can’t join, unless you have the right face. The new Tooheys New campaign explodes all that crap and firmly recasts mainstream beer as champagne for the masses.”

Filming was shot in Melbourne in November 2005 by director Garth Davis via Exit Films, Melbourne with producer Karen Sproul and director of photography Greig Fraser.

Visual effects were developed at Fin Design. Sound was engineered at Nylon. Editing was done at Guillotine.

The ad is accompanied by the main title from Elmer Bernstein’s soundtrack for The Great Escape. 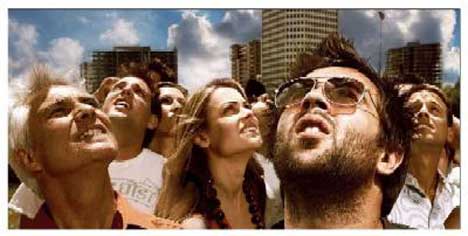 21 Replies to “Tooheys New Catapult For The Love of Beer”