In the lead up to the FIFA World Cup a soccer-focused PSA is encouraging children not to discriminate on the soccer field. Two teenage boys choose their soccer teams from the boys waiting around them. “Joe”. “Steve”. “Aaron”. “I’ll take that one”. As they reach the final three they start to laugh to themselves, and are joined by giggling girls on the sidelines. They have the choice of two tall African American teenagers and a short white boy holding the soccer ball. They choose the two teenagers, leaving the young boy alone as they take their teams on to the field. The young boy puts the soccer ball down and kicks it over the heads of the other players, scoring himself a goal and the admiration of the teams. The two captains are abandoned in the rush to congratulate the new team player. The super: “Human Right #2. Don’t Discriminate. What are human rights? Find out at www.youthforhumanrights.org. Youth For Human Rights International. 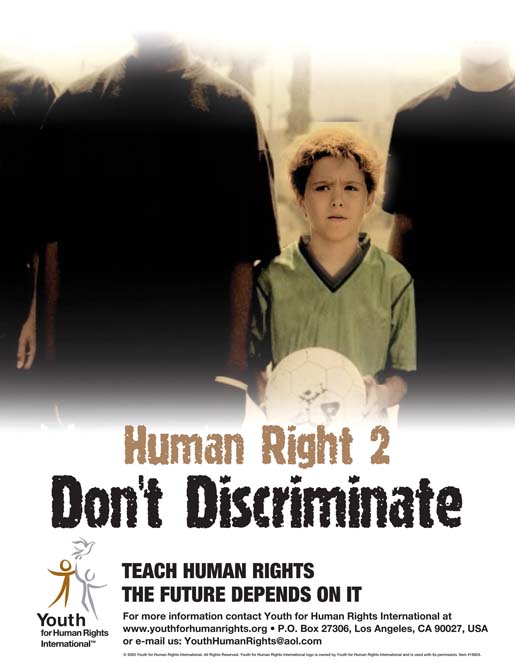 ‘Freedom of Expression’ features young musicians playing a variety of instruments and dancing, demonstrating a diversity of expression to a soundtrack with more and more layers.

‘Freedom of Thought’ has young people talking about what they believe in. One of the young people says “I believe in aliens, of course’, perhaps a reference to the Scientology connection.

The ads were directed by Taron Lexton, who also directed Youth for Human Rights International’s “UNITED“, a five-minute human rights hip hop music video exposing and challenging gang violence and bullying. The music video has been shown on television, in cinemas, film festivals and human rights rallies. Taron is the son of Mary Shuttleworth, president of Youth For Human Rights International and is himself the director of his own media company TXL Films.

One Reply to “Youth for Human Rights International Against Discrimination”