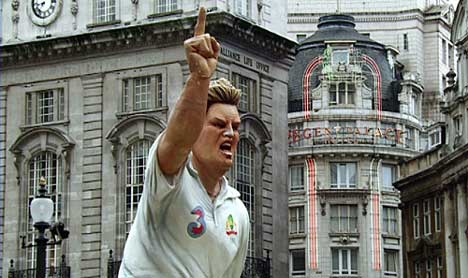 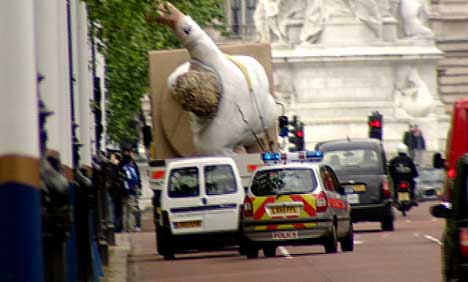 In “Where’s Picadilly?” a larger-than-life Jarrad Australian larrikin calls out from his truck cab in the streets of London. “Does anybody know where Picadilly Circus is? Do we head down this way? Picadilly Circus is it this way? OK here’s the river, I think. We’re never going to get Warnie up…. Why did you send us down here?” Click on the image below to play the video.

In “A Taste of the Future” Warnie’s being moved through the streets of London by a group of Australians, with a commentary from our loud larrikin. “Just giving you a taste of the future people! We’re out of petrol! You people are going to have to move! Warnie’s coming through! See if you guys can hang on to the old Ashes eh? Now remember who you’re holding, it’s Warnie!
We’re recording in here so we’re going to go a bit slow.” An English bystander asks, “Where are you going to put this?” “Picadilly.” “You’re not actually going to put that near Eros?” “Bring a cup of tea next time. Point it this way. I’m positive about it alright?” Click on the image below to play the video. 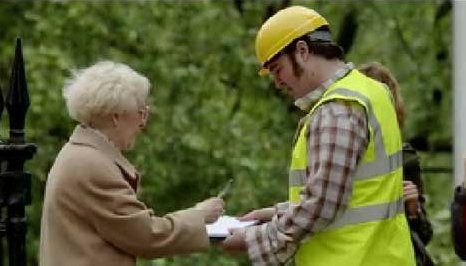 In “Geez They’re a Suspicious Lot” an Australian larrikin stands on the streets of London collecting signatures for the delivery of Shane Warne’s statue. “Gidday there! I just need a bit of a hand. I’m got to make a delivery but I need a signature for it. Just need a signature for a delivery. Would you be able to…. 3 Mobile Ashes. Just down there. Just put a cross there… Geez they’re a suspicious lot. I just need an English signature cause we’re delivering to the English people. Just pop your signature there mate! So pop it down there. That’s Shane Warne, a real cricketer.”

In “You’re a Pom?” the Australian larrikin recruits a quiet local to help unveil Shane Warne’s statue in Picadilly Circus. “Gidday! Now we’re unveiling a statue. Come on mate, five minutes! Look we need an English representative to unveil the statue. You’re a Pom? You a Pom?” “I’m English. Alright I’m a Pom.” “OK let’s get on to it. What’s your name, now, mate? Er, Paul. We’re here today for the unveiling of a present from the Australian people to the English. Pull away, mate, pull away! You’re not impressed. What’s going on mate?” Click on the image below to play the video.

In “It’s fear that you’re feeling” Australians in yellow surround the newly unveiled statue of Big Warnie. We’re provided with a commentary by the loud larrikin. “Ascending the throne of heaven, On your knees boys, bow down bow down.” An Englishman protests, “You can’t put that up in Picadilly.” “It’s OK mate! It’s Warnie! All hail Warnie!” “It should not be in Picadilly!” “Don’t ruin this moment for us! We brought him all the way from Australia.” “No I’m shocked.” “Hey hey don’t look a gift horse in the mouth. It’s OK mate, it’s OK. It’s just fear that you’re feeling. Fear that you’re going to lose.” “It’s not fear, it’s outrage.” “It’s not terrible. You’re just saying that because you’re scared of his flipper.” Click on the image below to play the video.