Frank Wesley’s “Forgiving Father” is one powerful image. It’s formed from a life-size wood block and was exhibited at an exhibition at Australian Catholic University in Banyo last year. It can be found in a collection of images at the Center for South Asian Studies at University of Virginia, in their online gallery, and at the Australian EJournal of Theology. 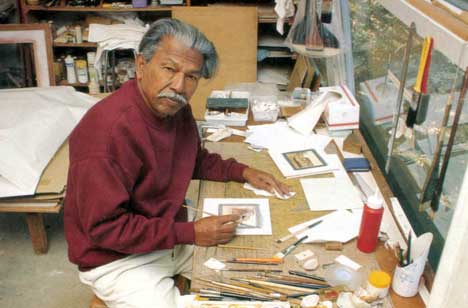 Here’s a short biography, much of it drawing on the artist background at The Word Made Visible, Permanent Art Collection of the Lutheran Center.

Frank Wesley is well known in India. His paintings were frequently reproduced as Christmas cards by the Indian Society for the Propagation of Christian Knowledge. Frank studied painting at the Lucknow School of Arts in Delhi. He took his graduate and post-graduate work there and eventually joined the faculty, staying for 12 years. From there he went to Kyoto, Japan to spend five years at its College of Fine Arts. From Japan, Wesley went on to the United States and studied at the Art Institute of Chicago. After two years in the United States, Wesley returned to India. In 1965 he joined the Christian Association for Radio and Audio-Visual Service as a part-time staff artist. In the last part of his life he lived in Nambour, Queensland. He died in 2002.

“My main work,” said Wesley, “is to paint the Bible in our own Indian way. It is to do something for the church in the field of art.”

Wesley belongs to the Lucknow school of painting. His guru was Bireshwar Sen, one of the foremost students of the late Aribindranath Tagore (cousin of the poet), a famous artist and founder of the Bengal school of painting. Mr. Wesley’s paintings reflect this influence and that of the Chughtai school of painting that flourished in India at the turn of the century.

Geraldine Wheeler has written a ‘catalogue essay’ at the Australian EJournal of Theology. Lindsay Farrell has written meditations on Frank Wesley’s “Forgiving Father”.