Budweiser’s 2006 Super Bowl TV ad, “Clydesdale American Dream”, has been nominated for Most Outstanding Commercial in the 2006 Emmy Awards. The beer, touted by Anheuser-Busch as part of the American dream, was also the official beer of the FIFA World Cup. I’d be curious to hear how American viewers perceive the Clydesdale story representing the American Dream. A clydesdale foal runs into the barn and places its neck into the yoke, ready to pull the wagon. A dalmatian dog takes a look as the foal stamps its foot, struggling to rock the wagon forward. At the other entrance to the shed two adult clydesdales watch with interest. The music swells as the foal tows the wagon out of the shed into the open. We see the two adults pushing the cart with their heads. A man sits with the dalmatian and says, “I won’t tell if you won’t”. 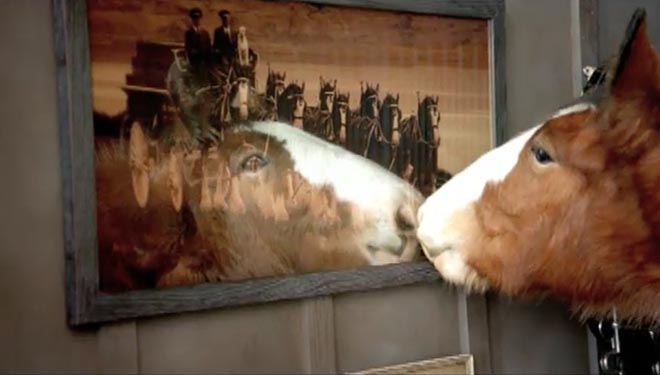 Joe Pytka, director and director of photography, worked Venice-based Pytka Productions team executive producer Tara Fitzpatrick and producer Linda Masse. The Clydesdale spot shows the mastery of Joe Pytka, particularly in the use of dark and light. Note the light shining down through the roof as the horses pull the wagon out the door.

Music and sound design were done at Elias Arts. Audio was mixed at Lime Studios.